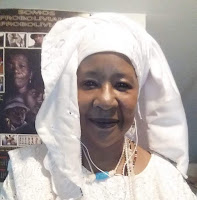 Greetings, Peace & Blessings to you, your family and loved ones.

So, it seems we have glided into what is being called, the New Year.  Hmm, isn't that interesting that we are in the dead of winter and calling it a New Year.  Well it's certainly a new fiscal year for the banks and tax season, however, there ain't much new happening if you live in a temperate climate like here in the US.

Have you ever noticed that the United states continent is water locked by two oceans and land locked by two countries, and has all 4 climates within its orders, not to mention the climatic and weather changes in between?  We could get into the whole climate change debate, or geo-engineering but that's not what this video is about. 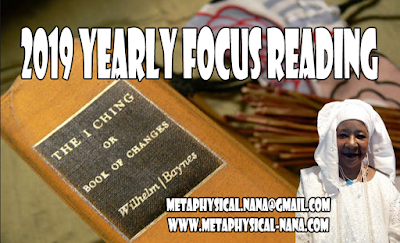 
So let's go back to the supposed New Year, January 1, 2019.
Again, the thinker may wonder how it came about to be a universal, or shall I say global turn of the year from 2018 to 2019, midnight January 1, 2019.  The fireworks and riffles shot off, the champagne bottles popped, first of the year kisses were planted, drinks toasted, and celebrations that began with Thanksgiving Day began to wane for just a few weeks.  But it's still the dead of winter in most of the northern hemisphere, and for some reason, folks are celebrating something New, in fact a whole new year.  Not the trees, not the grass, not the animals, not the birds, not even the insects, but the humans, they are celebrating something new, as if it really, really happened.  But what really did happen?  Who really knows, except that over spending during the previous weeks may bring in some new bills and some new headaches.

If you do a little research, you will find that the Winter solstice is really the culprit behind all this jollying.  The Catholic church in its effort to bring more converts into its fold decided to incorporate the Winter Solstice into the Birth of Christ and hold on to the traditions of the pagans while fomenting hostility against them.  Hmm, that sounds familiar, you know the old, we don't like protesters so we will water cannon them, but we will support the "rebels" in other countries, but please don't let me get off topic.

So let's look at how we all got bamboozoled to celebrate the New Year on one of the most ungodly cold days of the year, January 1.  I don't know about you, but seriously, trumping around in scant clothing on a cold winter day in parade regalia is a bit out of bio-rhythmic cycle.  Poor bones, and freezing toes and fingers, but the party and the parade must go on, after all, it's New Year's Day!  Have a beer and toast the super bowl ads, winners and sports parties.

And remember, those resolutions, did anyone resolve within themselves to save their money and spend less, during the next holiday season, cause if you did, those telemarketers and robo callers will try all they can to change your mind.  They need you to spend, spend, spend, and consume, to keep their hope alive. 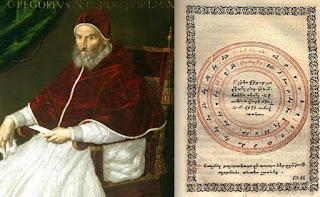 Now, back in 1582 Pope Gregory XIII decided he wanted to start his own take on this time construct and do a little dabbling with the Julian calendar. (See the link in the description below for the Wikipedia version of this debacle).  Imagine the hubris.  I just woke up one day, I am the Pope and I can decide how people in my world can measure time.  The irony of it all is that is exactly what folks have been doing ever since 1582, without missing a step, except for the Jews and the Muslims,  and a host of other folks, who have made up their own calendar, and of course we can forget about the Mayans whose calendar has been purported to be the most accurate calendar as it relates to the earths rotation around the sun.  Ironically, just for the sake of continuity, there's the need for one focused calendar, while the other "lesser" calendars are utilized, making the world and its inhabitants in the industrialized world a bit schizophrenic along with all the other out of cycle things folks in the industrialized world do. 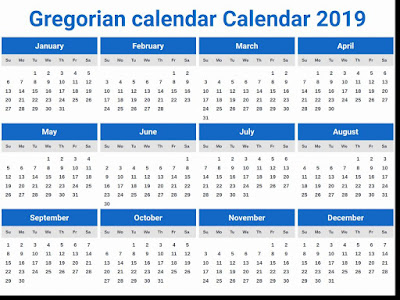 The Gregorian calendar is the most widely used civil calendar in the world.[1][2][Note 1] It is named after Pope Gregory XIII, who introduced it in October 1582. The calendar spaces leap years to make the average year 365.2425 days long, approximating the 365.2422 day tropical year that is determined by the Earth's revolution around the Sun. The rule for leap years is as follows:

The calendar was developed as a correction to the Julian calendar,[4] shortening the average year by 0.0075 days to stop the drift of the calendar with respect to the equinoxes. To deal with the 10 days' difference (between calendar and reality) that this drift had already reached, the date was advanced so that 4 October 1582 was followed by 15 October 1582. There was no discontinuity in the cycle of weekdays or of the Anno Domini calendar era.[Note 2] The reform also altered the lunar cycle used by the Church to calculate the date for Easter (computus), restoring it to the time of the year as originally celebrated by the early Church.

The reform was adopted initially by the Catholic countries of Europe and their overseas possessions. Over the next three centuries, the Protestant and Eastern Orthodox countries also moved to what they called the Improved calendar, with Greece being the last European country to adopt the calendar in 1923.[6] To unambiguously specify a date during the transition period, dual dating is sometimes used to specify both Old Style and New Style dates. Due to globalization in the 20th century, the calendar has also been adopted by most non-Western countries for civil purposes. The calendar era carries the alternative secular name of "Common Era".   https://en.wikipedia.org/wiki/Gregorian_calendar

But then again, is the earth really rotating around the sun, or is the sun rotating around the earth.  Jeez Louise we can't even talk about the construct of the Gregorian Calendar that has subjugated the planet since 1582 without getting into all kinds of other political babble.  Bah humbug, New World Order, it looks like you have been active ever since the Council of Nicea back in 325 AD. 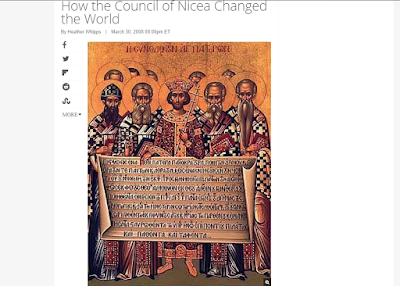 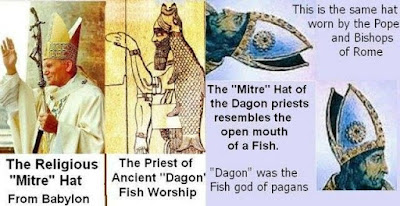 Anyways, to me, a New Year is when I see green sprouts coming out of the ground, out of the trees, and the fruit flies are multiplying again.  Other wise, ain't nothing new, except taxes are due.

And while I'm at it, let me read a passage posted by chief_akil on instagram and I quote.
From @chief_akili on instagram

The saga continues. How can it be a new year when plant life & the potency of the Sun's energy is dead in the Winter Solstice? The mind fuckery is still at an all time high. When you celebrate so called 'New Year's', what you are doing is offering yourself as a ritualistic sacrifice to the Roman god Janus. The term 'Janus' is the origins of the word 'January'. Janus is the Roman god of beginnings, doorways, gates, transitions, time & etcetera. Therefore, once you summon Janus, you're opening up their gateway to control your past & future, which is your entire existence & beyond. This is why Janus is considered a two faced god because they look to the past & the future. Additionally, the Vatican being the gate for all the secrets of the world, is the home for Janus. The Jesuit Priests are the primary gate keepers. The Pope, their front man, is the modern day Janus with his mitre being shaped like a fish, symbolizing a two faced deity that has & still is controlling the global population through the Age of Pisces (the mythological Jesus period). The Age of Pisces (mitre Jesus fish) is long gone. But Janus (the Pope) looks to control everyone & everything from the time period of both the past & future. We're actually in the Age of Capricorn (the Baphomet- The Goat of Mendes). How could civilization move forward if they're stuck in the past? This is why Janus (the Pope) represents the gateway to higher consciousness since he & his handlers control all the secrets of this world from both the past & future. And that mindless puppet (Gay-Z) has the nerve to talk about he has the 'keys'. No, Janus (the Pope & the Vatican) is the one who has all the keys. Even the word 'Janitor' derives its origins from 'Janus' because the janitor has all the keys! Once they (the Eurocentric ruling class) have your mind, then they have your entire destiny in their hands. Thus, entire generations thereafter will indefinitely be programmed under intense mind controlled operations. The science is self evident.

In the meantime, for those of you who still would be interested in what the oracles have to say about the coming 12 months, contact me, and I will be more than happy to give you a 2019 yearly focus reading.  We will cover several topics, health, career, business, family relations, educational pursuits, etc.

Now the I Ching knows we are stuck in the illusionary construct of time, and it is willing to guide us through our own delusions, hoping to get us on track following the tao of it all.

Personally, the real new year of journeying for our individual Soul's destiny is the day we were born, that to me, is the most opportune time for a yearly focus reading.  However, if you would like a sort of road map of what to expect from Jan. 1 2019 to Jan. 1, 2020, as it relates to your own personal life, feel free to contact me at metaphysical.nana@gmail.com.  Bring a friend and get a discount.
I use the Zoom meetings platform. It's has a great teaching tool, works well with pc, mac and cellular, and allows for recording all sessions for future reference.

Let me end by thanking all who stopped by, new folks, please subscribe and push that notification button to be updated about all my new uploads, and for the returning ones and all of you out there, be sure to leave a comment.  I'd love to hear from you.

So peace and blessings to you , your family and loved ones, and by the way, Happy European New Year! 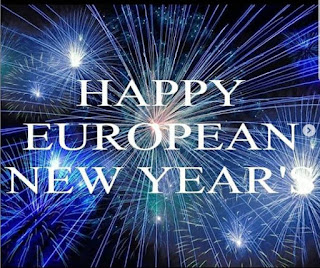 
New Year, Old Calendar: The Origins and Controversy of the Gregorian Calendar
https://www.ancient-origins.net/history-important-events/new-year-old-calendar-origins-and-controversy-gregorian-calendar-005047

Who Was the Ancient Roman God Janus?
https://www.thoughtco.com/ancient-roman-god-janus-112605