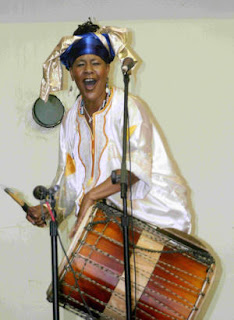 Question: May we have brief information on your background? (Example: years as a priestess, family, profession etc.

Answer: First let me begin by thanking you for having enough interest in me to want to interview me. I am honored for your time and attention. This is something that I learned from my Ghanaian brothers and sisters. They are very grateful to anyone who would take time to get to know them.

Question: Would you give us some history on your group?

Answer: The “Voices Of Africa” Choral & Percussion Ensemble started in 1983 with me and my four children, two boys and two girls. They were very young and very shy about singing. As for me I had been inspired to write a song for the Ancestors and for African American people and since I was their mother they had to comply. I always had a vision about being black family in America that was famous because of our artistic and creative talents. My children were and still are a blessing to me. They are very talented in many areas and while I wanted to sing and dance, they had some other ideas about it. My boys ultimately acted out so bad they were banished from the group and my girls and I have had our moments but we have managed to stick it out. Now they actually enjoy it and I am looking forward to my dream coming true.

Question: What called you to become a drummer?

Answer: My children and I continued for some years of singing and drumming, not professionally, just from time to time, at rituals and ancestor parties. For the most part we would just have drumming and dancing sessions at home. My children were so funny because I always wanted to join them when “they were having fun.” I just was amazed at the drum rhythms and songs they would come up with. I was thrilled about their talent. They on the other hand wished I would find someone else to play with

In 1988, I met Obrafo Kwabena Akyeampong (Ah-chey-am-pong), he was one of the original members of the Arthur Hall Afro-American Dance Ensemble. He was my dance instructor for a while and then he brought the samba drum to class. He announced that that was a drum I would never play because I was a woman. I thought he was out of his mind. I never really stopped to think that the drum would cause such a ruckus. “Give me the darn drum and let me play it,” was my attitude. He challenged me though and worked me hard. He taught me samba rhythms that were played with the djembe in several musical pieces from Ghana, Guinea, and Senegal. We started a Children’s Dance Company called Eleto Egbe Omode. Now my children were performing dance, singing songs and playing the sekere.

I felt truly inspired to drum. That drum raises energy from the gut and pulls the house down. It holds the bottom and the pulse of the rhythm. You have to be strong to play that drum over a battery of three or four djembe(s) but that did not alter my determination. After a couple years I was a force to be reckoned with. I played with men and it was great. At first they were a little uncertain. I gained their respect, as I would maintain my beat for the time they did. It was powerful and it was fun.

One day at a festival I found the sakara drum. I brought that drum to the group and with the technique and science of African poly-rhythms that I learned from Obrafo, we started creating rhythms that we have been told by African born Africans, took them home. In a few years we added the samba to our sakara drum battery and the rest is history. We sing a cappella and add a unique flavor to our sound with our mixture of sakara drums and samba drums.

Question: Traditionally drumming requires a lot of heat, how do women drummers balance that energy out?

Answer:  “We are women and we play drums.” There are numerous women drum ensembles in Africa. There are secret rituals and ceremonies where men are not allowed, during these times women drum. Because women are the vessels of spirit, often at community rituals etc. the men drum so that the women can bring down the spirit, so to speak, through possessions. They are in high rank in terms of the traditional priesthood. So men would do the drumming so that women could be more focused on the ritual and the healing aspects of it. However, often the drum is called the woman, in particular in a family of drums the largest drum with the deepest tone is referred to as the Mama. It is considered female and it is the voice that brings the message from God. In essence the woman and the drum are one and the same. In our ensemble, while some of us are priests, our job is to bring the spirit out of those who are in our audiences. We are determined to get you out of your seat and praising the Lord, African style. So we burn with a fire and a passion that is absolutely beautiful to behold. When we are done, it takes some coming down, but we don’t become other than the healers and sustainers that we are meant to be as women. “We are women and we play drums.”

Question: What is the history of women's drumming in traditional cultures?

Answer: This question could take some time to answer, let’s just say that throughout Africa and the Diaspora women have been drumming for eons. As I explained before there were certain rituals and ceremonies that men were not allowed to attend. In traditional societies, there was delineation between what drums were played by women and how women played certain drums. To guard and protect the womb, there are drums that women are cautioned against playing. The hand drums that we play are powerful yet light compared to the barrel-shaped stand up drums that are often depicted as African drums. We claim to be baaaaaad in playing these drums cause we make them sound like they are their stand up counter parts.

Question: Will you provide us with some contact information on your group, in the event that one our readers would like to reach you?